In this video tutorial, I show how to start / stop JBoss 6 using the plugin Cargo for Maven. And to deploy an archive.
In the previous tutorial, I created and imported the project in Eclipse with the m2Eclipse plugin.
END_OF_DOCUMENT_TOKEN_TO_BE_REPLACED

I have recently started studying Apache CXF, the open source web service framework. I am familiar with developing Web Services using EJB 3, Axis or Glue. But not with CXF. Until now.
CXF is a mix of two projects : Celtix and XFire, which explains the name CXF.
It provides support for the JAX-WS, JAX-RS and JAX-RPC specifications.
Developing Web Services using CXF and JBoss is quite easy. The only annoying part is to figure out which JARs libraries
to include in the classpath and which JARs libraries to exclude.
END_OF_DOCUMENT_TOKEN_TO_BE_REPLACED

I just noticed that the latest version of JBoss, version 7 Alpha 1, is having a new set of folders and files.
END_OF_DOCUMENT_TOKEN_TO_BE_REPLACED

Of course if you run both servers at the same time, you will get errors such as “address already in use” because of services running on the same ports in both servers.
It turns out that you need to modify the D:\jboss-6.0.0.20100721-M4-Server1\server\default\conf\bindingservice.beans\META-INF\bindings-jboss-beans.xml file to avoid same port conflicts.
So I added 100 to all ports defined in that file, for server 1.
For server 2, I only modified the HTTP WEB SERVER port because port 8080 is already taken by Oracle.

Running multiple instances of a single JBoss server is a different story. More information can be found here (ServiceBindingManager) and here .

I received an email from the editor informing me that the book is now printed and will be available in bookstores next week (from July 5th, 2010).

It is already available for sale on Amazon and ENI.

An online version is also available.

Here is the cover of the book : 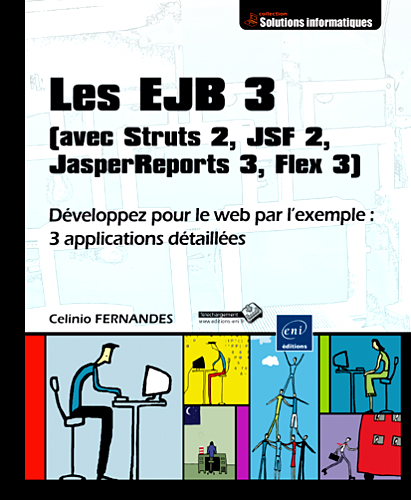 Before reading this book, I already knew the author, Francesco Marchioni, because of his web site –  http://www.mastertheboss.com/ – which is dedicated to JBoss. So it was with enthusiasm that I wished to get a copy of the book and I was not disappointed. Indeed the book is like the web site : practical, rich in samples and useful information.
END_OF_DOCUMENT_TOKEN_TO_BE_REPLACED

My shelf of books