Today I attended part of the Eclipse Day Paris 2010 event.
I was mostly interested in the presentation of EGit and JGit. 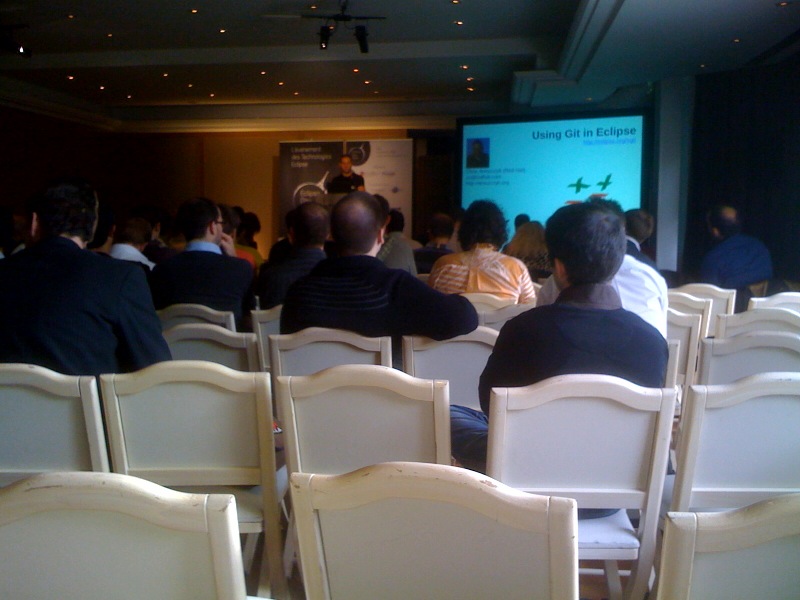 It is not the first time I hear about Git but I have not played with it yet unfortunately.
The idea of a distributed repository sounds great !
Distributed means no central repository. Each user has a full copy of the repository.
Many open source projects use Git. For instance Android or Linux. And Eclipse is going to use Git pretty soon too (CVS is already deprecated and SVN will soon be deprecated too).
Git was started by Linus Torvalds in 2005.

Chris Aniszczyk (Red Hat), a committer for the EGit project, made a 45mn presentation called “Using Git in Eclipse”.
The slides are available on slideshare.net.

Doug Clarke, co-lead of the EclipseLink project, gave us an update on EclipseLink (distributed in Weblogic Server and the JPA 2.0 Reference Implementation in GlassFish v3) and Dali, which i like a lot. This plug-in makes life easier for developers working on the persistence layer of any application. No demo unfortunately.

Regarding Eclipse, Mike Milinkovich, executive director of the Eclipse Foundation, quickly told us about e4 (Eclipse 4), the next generation of the Eclipse platform.